Corporate Governance: A Contrast of the German system with that prevailing in the UK 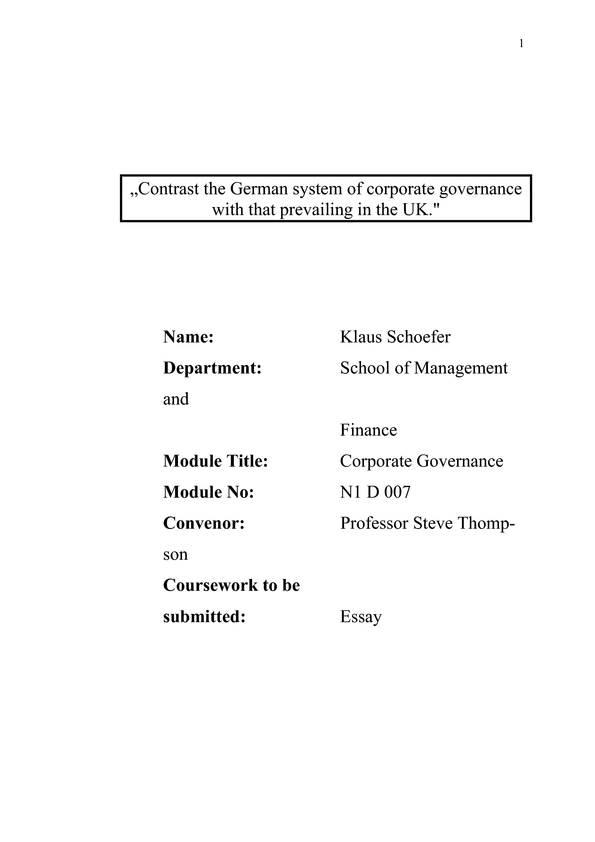 "... Institutions work the way they do because their composition itself reflects a certain mode of thought - which is also reflected by the way people work in them." (Charkham, 1994, p. 6) For a more complete understanding of the German corporate governance system, it is therefore useful to have a brief look at general observations on cultural differences.

In general, there is a much stronger link between industry and education compared to Britain. Formal qualifications are frequently used as marks of earned distinction by which people can be classified. This is also consistent with the high representation of PhDs at directors’ level or the apprenticeship system producing skilled workers (Facharbeiter) for trade and industry. Moreover, German enter- prises are considered to be embedded in society, and since they profit from society

they also have obligations towards it. This commitment is rooted in the German constitution (Grundgesetz) which states 'Property imposes duties'. Against such a background it is not surprising to find a consensus in Germany that companies are seen as a combination of various interest groups whose goals have to be co-ordinated. Shareholders are only one set of stakeholders and German management thinks of employees, customers, suppliers and the general public as well (Charkham, 1994; Schneider-Lenné, 1992). Co-determination regulations, for example, allow for an explicit representation of workers' interests both at plant level (Betriebsrat) and at enterprise level (Aufsichtsrat). 3. Legal Forms of Firms and Distribution of Ownership In Germany firms can be organised and run either by a single owner, a partnership, or by a corporation. Amongst corporations, the most important forms are the private limited company (Gesellschaft mit beschränkter Haftung or GmbH), and the joint-stock company (Aktiengesellschaft or AG). However, the proportion of listed firms and their share of total business activity is relatively low in Germany. This probably has its origins, in reservations with regard to adopting the legal form of the joint-stock company, and in particular to the process of going public (Clarke and Bostock, 1997). There are relatively few large public jointstock companies with a wide share ownership and extensive trading: "... in 1991 a mere fifty companies accounted for more than 85 per cent of all trading in domestic shares." (Schneider-Lenné, 1992, p. 12). As a result of these differences the German stock market is relatively small compared to the UK market. According to Hilary Collier Sy-Quia (1992), the German equity market is only 12 per cent